by SanetSmit
in Christian Fiction
0 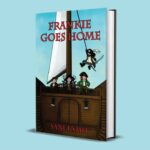 “FRANKIE GOES HOME” is a children’s book, based on the Ten Commandments and written with lots of adventure and fun, including pirates and slaves – with plenty to keep young readers entertained while teaching them good values.

It is 1863, and Frankie and his mates board a ship to get back home after working in a foreign land. A storm interrupts their journey, and they crash onto a deserted island and must find a way to survive until they can rebuild their ship to continue their journey.

Pirates attack their newly built ship on the way, and they got captured and sold as slaves. They learn to accept what they cannot change and appreciate what was taken for granted, like missing home.

Despite the hardship of working as slaves, they learn valuable lessons. They save their master’s wife from a fire and help to rebuild his house. As a reward, their prayers are answered when they are finally granted freedom.

From humble beginnings to a heroic end, Frankie and his friends return home, stronger and wiser than before.

* All proceeds received by the author will be donated to children’s charities.*

As a young child, Sanet would conjure up stories, share them with anyone who would listen. Growing up, she has taken the time to refine her storytelling and writing abilities and its potency in storytelling. Sanet studied in South Africa and New Zealand. Her current movie got signed with a Florida, US based producer and director, and her future plans include a television drama from one of her published books. Sanet enjoys writing suspense, romance, and children’s stories.

No Result
View All Result